Hillary, The Heller Decision Had SQUAT To Do With Protecting Toddlers!

Of the many lies told and obfuscations performed by Hillary in the last debate, perhaps the most ridiculous was her phony bluster about protecting toddlers as the reason why she disagreed with the Supreme Court in the landmark District of Columbia v. Heller decision. 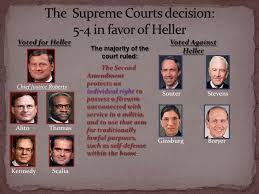 This “close call” 5-4 decision illustrates how important it is not to let Hillary appoint any Supreme Court justices!

D.C. v. Heller had nothing to do with toddlers or safe gun storage and she knows it. Too bad the neither the moderator nor Trump didn’t know better and call bullcrap on her.

The Heller case affirmed that private citizens had the right to carry guns for self-defense. According to The Federalist in analyzing the 5 most egregious lies told by Hillary in the debate, “Hiller revolves a then 66-year-old police officer in Washington DC, who was allowed to carry a gun in a federal office building to protect politicians and strangers, but not in his home to protect himself, his family, or his property.”

The Hiller decision codified or pronounced the Second Amendment as affirming the individual’s right to keep and bear arms for self-defense, ending a virtual ban on handguns in Washington D.C.

Click here to see the other 4 ‘most outrageous Hillary Clinton lies’ from the debate. Nice try Hill, but no cigar!

This entry was posted on Tuesday, October 25th, 2016 at 4:47 pm and is filed under Gun Control, Updates. You can follow any responses to this entry through the RSS 2.0 feed. Both comments and pings are currently closed.