A lesson in Socialism from none other that Mick Jagger

I’ll bet you didn’t know that before Mick Jagger (Sir Michael Philip “Mick” Jagger), was a rock star he studied accounting at the London School of Economics. Neither did I. The school celebrated its 120th anniversary in 2016 and boasts to have produced the most billionaires of any European university. Heady stuff, but Jagger never graduated from LSE and didn’t become a billionaire, though his net worth according to Bankrate.com is $360 million.

Jagger was smart enough to dodge the tax man becoming a tax exile years ago while making piles of money like so many other popular British bands from the 60s. The members of The Rolling Stones moved to France in 1971 because the British socialist government initially took 90% of their earnings. Someone has to pay for all the free stuff in a socialized country. And later they eventually parked money in Holland when France got stupid with taxes. Yes, he’s a quick study and he’s figured out you don’t want to have major surgery in the UK either. 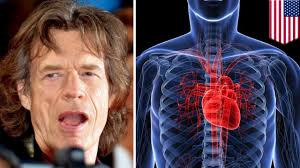 The years (he’s 75 years old!), the drugs, the women and the kids (8 kids with 5 different women), not to mention those great live performances have taken their toll and Jagger needed a new heart valve. Did he go back to England where they have socialized free medicine for all? “No, no, no” according to American Thinker, “he decided on the good ol’ USA, New York City”. Jagger reported on Twitter that he’s feeling much better now and on the mend – and also sent a huge thank you to all the hospital staff for doing a superb job.

Sadly British patients are not getting what they need when they need it and this is the story with socialized medicine (Medicare for all). It’s not a socialized medicine heaven, it’s called hell. The National Health Service’s highly paid bureaucrats save money by denying medical treatment, hoping the patient dies instead of medically knowledgeable personnel trying to improve a patient’s life. This is what Breadline Bernie Sanders, AOC  and most of the Democrat presidential candidates have in mind for us. Oh yeah everyone will be covered, but no one will get care.

Be careful what you wish for!

This entry was posted on Monday, April 8th, 2019 at 3:39 pm and is filed under Updates. You can follow any responses to this entry through the RSS 2.0 feed. Both comments and pings are currently closed.