Begging the question:  Do Bernie Sanders’ supporters even know who Fidel Castro was? Doubtful and the as Marco Rubio tweeted:  President Obama issued a pathetic statement on death of dictator #FidelCastro with no mention of thousands he killed & imprisoned. 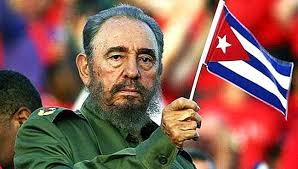 “Fidel Castro, the Communist Dictator of Cuba, has died at the age of 90. There have been those, over the decades, who have held him up as some paragon of a new world order, one in which people will not be subservient to either America nor capitalism. The truth is that he visited an economic disaster upon the island nation of Cuba. No, it was not the US, it was not any blockade or embargo, not anything external to Cuba that caused this, it was quite simply the idiocy of the economic policy followed, that socialism, which led to there being near no economic growth at all over the 55 years or so of his rule. What little that did occur happening when the strictest of his rules were relaxed.

It is polite, human and common to withhold criticism of the dead in the immediate aftermath of their demise. But leaving 11 million people grossly poorer than they ought to be in the name of a bankrupt ideology is not the stuff of which hagiographic obituaries are made.”

In the end, he leaves a poor island with very little hope.  He leaves political prisons, families crushed, and empty store shelves.

What happens now?  This is a great opportunity for President-Elect Trump to demand some real concessions from the island’s leadership.

Fidel’s death is really the end of communism in Cuba.  Raúl is also an old man and probably won’t be around in a few years, either.

Cuba is screaming for change.  Let’s hear it and demand real concessions from Raúl Castro.

And please don’t insult the memory of so many by sending a big delegation to his funeral.  Stay away and show your respect for the thousands executed by this regime.

Updates | Tagged: Bernie Sanders, Fidel Castro, he did to Cuba what Hugo Chávez did to Venezuela, Marco Rubio |

Learning through humor is always effective. Take a minute to glean the wisdom from one of my favorite humorists:  Sunny Lohmann of House of Sunny TV.

Take that Bernie and all you mindless simps populating our colleges & universities who today support a socialism you don’t understand. Here’s an idea. After Killary becomes the Democratic (I know, it’s almost the same as socialist) nominee, all of you who are pissed off and would never vote for her, can vote for Trump and save us all from that first woman president.

Comments Off on Good Advice: Never Eat Your Seed Crop |

Of course it’s silly, but I like it. What do you call a guy who wines & dines a woman with her own credit card?  A con artist. Hello Bernie!

Tune into House of Sunny or The Daily Sunny anytime you need a glimpse of the lighter side of politics.

This Video Speaks For Itself

This video is great and puts the PC culture right in the face of these mindless college students. It’s hilarious!

Their reactions, and the point of this, was to show that these students are indicative of a society in which PC trumps the ability to speak honestly and directly about potentially offensive matters. After all, the very idea of political correctness was born from Marxism. Could this explain why so many college students support Bernie Sanders?

‘Tell Me the Difference Between You and a Socialist’

Chris Matthews to Debbie Wasserman Schultz:  should Bernie Sanders as an admitted Socialist, speak at the Democratic National Convention? Then to put a fine point on it he asks a question I often ponder:

“What’s the difference between a democrat and a socialist?”

And BTW, DWS would probably love Bernie to speak in prime time because he’s so radical (praises the idea of returning to a 90% tax rate) he will make even Hillary Rotten Clinton look mild.