Why Do We Even Tolerate The United Nations?

Will a President Trump jettison the United Nations along with it the 22% of the regular budget & 28% of the peacekeeping budget currently paid by the United States? Diplomatic immunity is another thing that grates on me. It’s just another elitist bullcrap tradition that allows foreign diplomats to literally get away with murder. “Oh sorry that law doesn’t apply to me ~Diplomatic Privilege you know”. 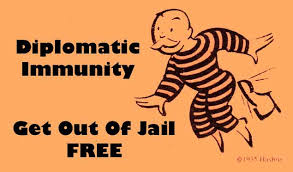 Diplomatic Immunity privileges extend directly from the 1961 Vienna Convention on Diplomatic Relations, or VCDR. It also includes immunity for members of the family, members of the administrative and technical staff of the mission and their families.

Millions in unpaid parking tickets are common knowledge, but the abuses of immunity extend far beyond that. For example human trafficking & drug smuggling by diplomats (or their errant sons & daughters) poses little risk of prosecution. Drunk driving? Fagetaboutit. Another report includes a Saudi Diplomat who raped and kept two women hired as domestic help for months before fleeing India without consequence. The list goes on and on.

CNSNews.com reported that last year American taxpayers coughed up around $3.024 billion towards the United Nations’ regular and peacekeeping budgets, more than what 185 other countries combined. Add in other voluntary contributions made to the UN and its affiliated organizations and the tab jumps to over $8 billion!

I think most of us have heard about the insult & injury showered on Israel by the UN Security Council intentionally orchestrated behind the scenes by NObama & Secretary of State John Kerry just last week.

According to Ben Shapiro of The Daily Wire, “The United Nations today is staffed by dictators and tyrants.”

Here are the 7 worst things the UN has done per Shapiro:

I say give them the boot and/or at least have them pay more of their fair share. Why is the US always ‘daddy warbucks’ for the rest of the world? But honestly, we really can’t step away from the table. The US leaving the UN would unleash their mischief and eliminate our veto over their actions as outlined in this American Thinker piece.

Updates, WTF? | Tagged: 1961 Vienna Convention on Diplomatic Relations, diplomatic immunity, Israel, Obama stabs Israel in the back, The UN Security Council, The United Nations, Trump will be a friend to Israel |