I’ve been silent since the day before the election and every day since. In fact the jig has been up for a long time with really no possible way out. Santa Claus winning instead of Romney will only accelerate the time line.

Let this be the start of your education in how the world turns out. You cannot change the outcome, but you will have some choices and possibly be able to position yourselves somewhat better than those who want to keep their heads in the sand, watching the garbage puked out at us by the alphabet media. Hell- even Fox and all the right leaning pundits. Same smell. Stop watching a month or so see if anything looks like progress when you turn the garbage back on. HOPE, NOPE, DOPE.

Tell me if you can what the difference is between Harry Reid and say Speaker of the House, John Boehner. YOU CANNOT because there really isn’t any difference. Sure Boner may say it (lie to your face) somewhat more palatable than Dirt-bag Harry, but it’s really ONLY about them holding to their power and fleecing the rest of us as they line their pockets and take care of their elite brethren.

Maybe it’s just me, but I can’t see our Olympic athletes donning those, ah how do I say it any other way (but gay?) uniforms Ralph Lauren came up with for the Summer Olympics in London. No, I am not the only one! Check this out. 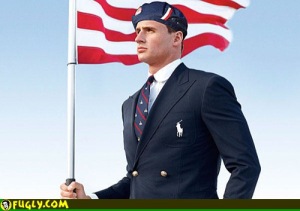 I don’t know which is worse, the utterly puke design or the fact that they were made in China. This is what happens when you go the International route (think UN anything). Even Harry Reid, Senate Majority skeleton got this one right.

Maybe I’m being a homophobe and this is a natural progression: DADT (Don’t Ask Don’t Tell) gets repealed, West Point holds its first Gay Pride Parade, Obama evolves into a gay marriage supporter and now this, but I don’t think so. What about you?

Is Harry Reid intentionally being dense or does he think we’re all stupid?

Contrary to what the good Senator from Nevada says, Dick Armey, retired Congressman from Texas and a long time proponent for tax reform tells it like it is:

“Washington is the only city in America that makes its entire living off the rest of the country. The city produces nothing. It only taxes, regulates, spends, and compels through the use of force.”

Based on your experience with taxation in America, who ya gonna trust Harry or Dick?

Are you ready for a different tax system? I am.

Be sure to check out my Tax Reform category (in the right side panel) which I post to every Friday, to raise your tax reform IQ!

Comments Off on Voluntary? Baloney! |

Don’t Choke On This

“The federal government has accumulated more new debt-$3.22 trillion ($3,220,103,625,307.29) during the tenure of the 111th Congress (the group who just finished under the leadership of Harry Reid and Nancy Pelosi), than it did during the first 100 Congresses combined, according to official debt figures published by the U.S Treasury.”

Unfortunately during here tenure the federal government has run up a shopping $5.177 trillion in new debt. (again courtesy of Hawaii Free Press).

The incoming Congress is planning on countering the PAYGO scheme (which the House leaders promptly exempted every spending bill from as emergency spending) with the CUTGO project. I don’t hold much hope, but we’ll see won’t we?

Remember it’s our job in these next 2 years to make the Republicans do what they said before they got elected or re-elected. Burn baby burn, the fire could get hot!

Comments Off on Don’t Choke On This |