Member of Trudeau’s security detail throws in the towel

Corporal Daniel Bulford, former member of the Royal Canadian Mounted Police (RCMP), the federal police service of Canada couldn’t swallow it any longer. And BTW, this was long before the Freedom Convoy even started. He and other “Mounties” (as RCMP officers are often called) wrote a detailed Open Letter to RCMP Commissioner Brenda Lucki on October 21, saying they as officers cannot “willingly participate in enforcing mandates they do not believe in”. The letter was signed by over 33,000 officers of law enforcement and public service.

Remember, we’re all in this together! Oh, except for Congress and their staffs, who have exempted themselves from vaccine mandates and have access to Ivermectin which they prevent us from using. And remember when the FBI and the DOJ used to be our friends? Not anymore. They are tools of the Biden Administration to punish anyone opposing them. Wake-up sheeple!

Well, Well What Do You Know? Other Nations Ignoring Paris Climate Goals on The QT

President Trump demonstrated his leadership a few months ago by bucking the entire world when he abandoned the phony Paris Agreement. But interestingly enough according to Lawrence Solomon of Energy Probe, a Toronto-based environmental organization, it now seems Canadian Prime Minister Justin Trudeau (you know, the kook paid $8 Million to a terrorist who killed an American soldier), 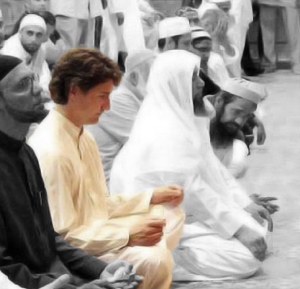 Justin Trudeau 2 yrs before he was elected Prime Minister

is one of the only signers of the Paris agreement who is actually abiding by the exacting demands of the accord. Most signatories are abandoning the Paris Accord undoubtedly “because voters in large part put no stock in scary global warming scenarios”.

Australia is the latest to abandon the folly. Initially the government there blindly accepted proponents’ claim that renewables had become competitive in the free market and went on a renewables building binge and since have suffered a series of six major blackouts including one this past September that blacked out the entire state (a state 40-per-cent larger than Texas)!

You see surprise, surprise wind & solar only produce if and when the wind blows and the sun shines! After all the photos ops and the preening by the libs, politicians must get back to the business of meeting the real needs of their citizens—which all depend on the availability of affordable energy.

National elections in Austria resulted in conservative parties coming in 1st and 2nd making it likely they will form a pro-carbon coalition government, and a blow was delivered to Germany’s climate policy when a leak revealed the environmental ministry was hopelessly behind in meeting carbon reduction targets.

Aside from the whack-o, lefty lib-progs, people have a deep revulsion at top-down governments laden with jet-setting politicians & pathetic celebrities jet-setting to posh locations preaching restraint to the masses.