Okay, Vacation’s Over. It’s Back to The Real World & Obama, Our Racist-in-Chief

After three weeks of road-tripping around the western United States (mostly Idaho & Wyoming) and seeing some beautiful country, lots of wild animals and of course, eating in new and different places along the way (which I love to do) we’re back in Hawaii, back to our routine and of course the news of the country which we try to ignore while on vacation.

So here we go-

Tired of his shouting constantly down guests and his gigantic ego, I stopped watching O’Reilly a few months ago but a fellow patriot (hat-tip Rich) sent me this and it is worth all 7+ minutes of it.

Maybe they should examine the breakdown of the family -black & white, but especially black, and how liberal/govt programs have contributed. Or how about the dismal education system offered in inner-city government schools? Jobs and/or training opportunities for minorities? An utter disgrace. . . . . . . jes saying, Mr. Prez.

Moving on Down The Road Toward Grand Teton National Park

What a gorgeous drive it was! At least 150 miles of it bordered the Clearwater River in Idaho as part of the Lewis & Clark Trail.

The Lewis & Clark expedition began in 1803 in Washington D.C. The trail of their trek, if I may be so blasé, zigzags down the Eastern seaboard then meanders through several Midwestern states eventually reaching the great plains then continues through the mountains and valleys of Montana and Idaho (where we picked it up just outside Lewiston), Washington & Oregon finally ending at the Pacific Ocean. The 4,600 mile trail goes through 4 time zones and some of America’s most beautifully, rugged country imaginable and has been memorialized (Nobama’s sequester notwithstanding) by the National Park Service in an excellent way.

After a long days drive we over-nighted in Butte, Montana with the specific purpose of hitting the Patagonia Outlet store before continuing on to Jackson Hole. That was a bust for 2 reasons; the store was actually in Dillon, not Butte (a good hour and a half blown there) and once we found it we decided it should have been called “Patagonia’s New & Expensive” store. I mean come on, doesn’t outlet sort of conjure up visions of OK maybe last years styles, but surely discounted, two-fers, some kinda bargain? Well it does to me. The only good thing about the time-suck detour this turned into was Sharky’s Garage, an awesome breakfast joint in the location of the old garage once housed there. You already know I like my breakfasts from the previous post and this did not disappoint. Biscuits ‘n gravy, eggs cooked any way you like with your choice of meat, homemade toast, pancakes, etc., etc. Oh and did I mention CHEAP (Some would say my middle name!)?

My goal on this trip, if you must know is to gain at least 10 pounds (to make up for 15 lbs or so lost over the last few weeks (my thyroid is outta whack) and believe you me, I’m having fun trying! Never mind the late start and being jilted at Patagonia’s, we made it over the Tetons Pass and into Wilson (the small town ten minutes outside the park where we’re actually staying) in the cutest cabin ever! 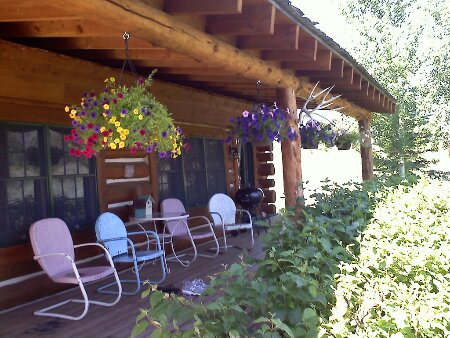 We’ve got some friends from Sacramento joining us for the weekend and between now and then, more eating, some hiking and loads of sight-seeing. Check back later for travel updates and adventures from here in the Rocky Mountains of Wyoming.

** search CATEGORIES under travel on the right side-panel to see previous travel blogs from Argentina, Uruguay, Durango and parts in between**