The 2012 Presidential campaign has been kicked off and Obama is flip-flopping so much you would think he’d grown scales -a fish suddenly found dockside -out of water and gyrating every which way, to get re-elected. 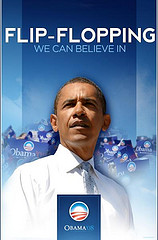 It’s hard work telling the good guys from the bad because a majority of both parties are self-serving crooks! I am constantly maligned as Republican, but it ain’t so! I haven’t forgotten it was the Bush White House and the GOP that pushed through the Medicare Prescription Drug Bill in 2007, supposedly to help millions of seniors defray their prescription costs. It was a total scam and a victory for big Pharma. The key provision inserted by lobbyists prohibited Medicare and the Fed govt. from using their vast purchasing power to negotiate lower prices.

How’d that work out? Here’s how: take a look at the price the Veteran’s Administration was able to negotiate for these 2 popular cholesterol drugs compared to the best price Medicare got:

Pay attention closely to what each side is talking about in the budgets offered up recently; the compromise on the 2011 budget $38 billion is a drop in the proverbial bucket, but for all the bitching and moaning you’d think the world was coming to an end.

Senator Jim DeMint of South Carolina just introduced an amendment to the Constitution for term limits. This would put an end to career politicians only interested in amassing power and money for themselves. You want to separate the wheat from the chaff, look who’s signed on to S.J. Res. 11 as co-sponsors. If you don’t see your Senator on the list let them hear from you!

These are the ones with your best interests at heart. BTW, they’re all Republicans and several are Tea Party favorites.