Ha-ha-ha! That’s A Good One: Conservative Victory Party to Pick GOP Candidates For Us

Have your heard? Karl Rove one of the mega-brains behind the Republican Party, is starting a new Super-Pac and he’s adopted the typical misnomer strategy of the left by calling it the Conservative Victory Project. Ha-ha-ha-ha! That’s a gut-buster.

Calling it conservative the strategy goes, low information voters and middle-right Americans will jump aboard. All it really insures is Rove and his cohorts control the money doled out by the Republican Party, and incumbents (the go along to get along crowd) keep their seats & power. Oh yes and Rove, etal, will dominate every talk-show on the right from here through 2014 and into the next presidential election. And win or lose Rove gets paid!

Remember his full sweep prediction? Romney would win in a landslide and Republicans would take the House AND the Senate. Really? So what happened to the last victory you called, Rove?

They blame the Tea Party supporting too many unqualified candidates who beat out GOP incumbents in primaries, only to fail in the general. To prevent this again, the Cocktail Party, RINOs, the establishment in the GOP, whatever you want to call them, are thumping this Super-PAC with the central theme of a Conservative Victory.

Gag me is all I can say. We don’t need no more stinkin’ RINOs who:

I think you get the picture, so beware when the Conservative Victory Party comes a knocking.

The Ticking Time Bomb in Perspective

Hat-tip Sue. This is the winning video from PowerlineBlog it’s over a year old, so of course the numbers have changed -and they haven’t gone down!

Take a look at this:

Comments Off on The Ticking Time Bomb in Perspective |

Bill Whittle (Wiki)- is an American conservative blogger, political commentator, director, screenwriter, editor, pilot and author. He also happens to have made the best political commentary in many years, moments after the election.

Whittle has elected himself the Virtual President for the next 4 years. He has promised to make speeches (and put them online) at all the usual times; after the inauguration, State of the Union Address, etc., basically whenever he thinks a real American conservative president would make a speech. He will hold virtual press conferences taking questions from a virtual White House Press Corps. Not the kind the MSM has tossed at President Obama since he came on the scene, but hard, tough questions from friend and foe alike.

Making good on this election eve promise, Whittle delivered his Inauguration Speech January 24th and it’s in the edit process!!

I promise to post it here as soon as he finishes the ‘spit and polish’ and it’s online.

Until then here is a re-run of his election night analysis and a new way going forward:

It’s long, but PROFOUND, so plan to watch it when you have time. You will NOT be disappointed.

WTF? Just Try To Make Sense of This

This is a re-blog from The Sword and the Shield. Thank you Robert! 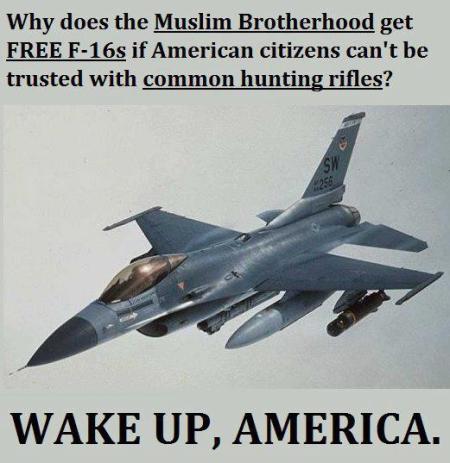 Yes, our own State Dept (the same group that refused help to our Ambassador in Libya) are now supplying 20 F-16  fighter jets and tanks in a Billion dollar aid package to Egypt. Don’t believe it? Check here, here and here!

Take a look at these:

http://youtu.be/s02SypCcYIc   (This is long, but it is profound, so plan to watch it when you have time)

Get A Fracking Clue; It Doesn’t Matter How Many Bibles He Uses!

Yeah, how do you like the ruse of NObama using two bibles for his swearing in ceremony ~you know the one where he swears to “preserve, protect and defend the Constitution of the United States” and defend America from all enemies foreign and domestic? Ha-ha-ha!

The sad thing is even the first time around he stumbled on the words because he didn’t mean them. Watch this:

It wouldn’t matter how many bibles he desecrated, all that ever comes out of his lips are l-i-e-s! The sad thing is, the joke is on us.

What about a whole new way of doing things?

Comments Off on Get A Fracking Clue; It Doesn’t Matter How Many Bibles He Uses! |

Are the President’s kids more important that yours? No of course not, but among the elite it doesn’t matter.

NObama is too crafty and wily to completely cross the line by banning guns. The 23 separate executive actions he will sign contain words and phrases like-

It’s gonna be another “feel-good, make work” program that costs a ton of money (we don’t have) and it will accomplish no meaningful change in gun violence but goes a long way to chop, chop, chop away at our liberties.

They will make it more expensive, more time-consuming & more onerous to own, buy and register guns or buy and store ammo. Basically this reduces your ability to protect yourselves against criminals with guns, but far more importantly it’s another step (drip, drip, drip) to disarming the citizenry and removing the last stop-gap between us and tyranny.

What about a whole new way of doing things? Check this out:

Comments Off on Eleven Armed Guards At Sasha & Melia’s School | 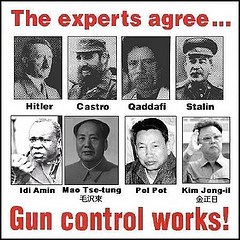 This is right from Ann Barnhardt. LIke she, I recommend everyone cross-post, forward & tweet this letter from former Navy SEAL, Matt Bracken.

“If boxcars and detention camps are to be in America’s future, then you, Mr. Security Agent, will have to disarm them the hard way first. Not Piers Morgan, not Michael Moore, not Rosie O’Donnell, not Dianne Feinstein, not Chuck Schumer. YOU.”

Pass this around, and call your mostly yellow-bellied swine of an excuse for Congressmen or women (start here with John Boehner, 202-225-0600) and let them know you will not sit down for the disarming of American. Tell them you will not accept any, not any, none of their “public safety” excuses. The Second Amendment has nothing to do with hunting or protection, it is the necessity of a free state and shall not be infringed, impinged or ‘comprehensively overhauled’. This means NO national registration requirements, NO banning of assault rifles or ammunition and NO confiscation of guns that were legal in 2012!

It’s the best $35 you can spend to protect our 2nd Amendment rights!

“A well regulated militia, being necessary to the security of a free state, the right of the people to keep and bear arms, shall not be infringed.”

BTW, the latest euphemism for gun control since these words do not poll well is,  “Gun violence prevention”. How’s that for horse-pucky?

Seriously, When Will We End This Crap? 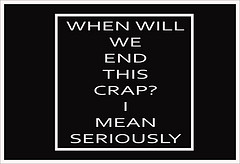 Sunday fun AND common sense from Bill Whittle. In case you don’t remember he’s the guy who did the brilliant recap on election night on how we got here and what to do about it.

I expect big things from Bill starting very soon. Keep your eyes and ears open for it.

The truth of the matter is~
It is time to do things differently. Both political parties are corrupt -not fixable, I am not talking 3rd party crap either. Please watch the YouTube vid below from Bill Whittle and start doing things differently.

here is the URL link so you can pass it around:

You are a part of the virtuous 50% of Americans. DON’T GIVE UP.

Comments Off on Seriously, When Will We End This Crap? |