Why Do The Libs Continually Favor Illegal Immigrants & Muslims Over US Citizens?

I really hate this and it’s pervasive on the left. The PC culture of not wanting to offend anyone even if it means (and it generally does), “to hell with American citizens”.

They banned the memorial on Dallas Hall Lawn so as to “avoid messages that are triggering, harmful, or harassing.” Who is offending by American flags and memorials to victims of a major jihad attack on American soil? Geller says,

“That’s it. We’re done. Cooked like the Ramadan goose.”

This is just one of the victims being honored by this memorial, but we can’t trigger the poor little snowflakes on college campuses, or Muslims can we? The 16th anniversary of the attack is coming up, but I fear pretty soon we will not even be allowed to talk about it.

This is Part 2 of a re-blog from PamelaGeller.com (formerly Atlas Shrugs). Geller is President & Executive Director of American Freedom Defense Initiative (AFDI) and sponsor of the Draw Muhammad Cartoon Contest as well as a staunch supporter of our First Amendment rights. The re-blog below is by AFDI Geller Fellow Nonie Darwish. Darwish by the way, would bring my count of moderate Muslims who do not agree with violent jihad to five, but she is a former Muslim (born in Egypt, and now an American citizen) and a strong critic of Islam. Part 2 follows:

I wish that the American media would recognize the danger of how modern-day Western Feminism is taking women back to bondage; the Islamic head-cover is being romanticized by feminists today, and American schools are encouraging young women to try it.

I wish America would treat its citizens as adults who can deal with the truth, make decisions for themselves and take the consequences.

I wish that American seniors were given back their important role in the lives of their grandchildren; to end Western banishment of seniors to live together alone in some permanent vacation or senior homes where they are told they are no longer needed in the family unit. Different ages have different roles and are needed within any group. I love to see parties mixed of all ages.

I wish that disfranchised African American youth understood how their “lives matter,”: that it is up to them to make their lives matter and no one should ask other human beings to make his or her life matter, especially in America. We are all the children of God, and are all in need to matter to one another, but no one is responsible to make the lives of others matter.

I wish that every American would not graduate from high school or college without basic education in economics and how wealth is created.

I wish that Americans had no drug or alcoholism problems.

I wish Americans understood that health care is not a right, because doctors and nurses cannot be forced to give their services for free. If a human right is tied to the services of others, then it cannot be a right.

I wish that every American teenager would visit a third world country before starting to vote, so he or she would be able to see for himself or herself what works and what does not.

And finally, I wish that our educational system would not shy away from teaching our kids a healthy dose of patriotism.

Part 1 can be found here.

This is a re-blog from Pamela Geller.com. Geller is President & Executive Director of American Freedom Defense Initiative (AFDI) and sponsor of the Draw Muhammad Cartoon Contest. The re-blog below is by AFDI Geller Fellow Nonie Darwish. Darwish by the way, would have brought my count of moderate Muslims who do not agree with violent jihad to five, but she is a former Muslim (born in Egypt, but now an American citizen) and a strong critic of Islam.

Here is her New Year’s Wish For America, Part 1.

I wish Americans would stop using the word “racist”. It is hostile, offensive, meaningless and vulgar. It is similar to the Islamic word “kafir” or infidel, designed to degrade and silence speech.

I wish America would not shy away from teaching that all cultures and religions are not equal, especially in their adherence to values of human rights and individual freedoms.

I wish America would reject any religion or ideology that commands the killing of apostates or members who leave it; such is not a religion, but a dangerous cult that must never be given equal treatment and respect with Biblical-based faiths.

I wish the US mainstream media would have the self-discipline to stop competing with politicians over steering the direction of government and would get back to reporting on government, culture, society, individuals, trends or whatever.

I wish Americans would encourage and train their sons and daughters to value marriage, having babies, and family.

I wish American politicians would give up on relying on “moderate Muslims” and “moderate Muslim governments” to help destroy ISIS. Moderate Muslims have learned to live with Islam as enablers and defenders, and have lost the battle with reforming Islam long ago.

I wish that American politicians and media would broadcast the daily threats and reckless statements by Muslim religious and political leaders, the same way they report on Christian and Jewish leaders. It would be great if the West held the Islamic educational system responsible for incitement to commit terror.

You Still Think it’s Smart To Keep Your Kids in Govt (Public) Schools?

Government schools (more commonly referred to as public schools) are injurious to your children, their future and to our country. Hat-tip Pamela Geller. 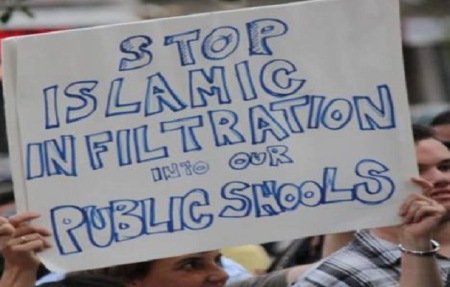 This has been going on far longer than most parents know, let alone the general public. Radical Islamic groups have infiltrated every aspect of our lives (our government, our schools, our churches, etc.) with the single intent of converting infidels to Islam & instituting Sharia Law.

According to Geller creator of Atlas Shrugs website, students at Pine Bush High School in Pine Bush, New York were shocked & outraged to hear over the intercom recently, the Pledge of Allegiance recited in Arabic.

You’re kidding right?? No and the outrage among students was so significant that the school issued an apology.

“We sincerely apologize for having the Pledge of Allegiance recited this morning in the high school in a language other than English”.

Huh? I’d like to know whose bright idea this was? It had to have been approved by someone in the administration. That means they were alright with the Islamization of our children in our public schools. Teachers are preaching the liberal ideology.

“Our schoolhouses have become places where Christianity is marginalized and Islam is given accommodation.”

This is not an isolated incident as evidenced here, here & here. If you still think it’s a good idea for your kids or grandkids to attend public schools (liberal indoctrination centers) it’s time to rethink that idea or at the very least give them a good solid education of the truth and what they are being subjected to so that they can stand against this ideology every time they are subjected to it.

Help pass liberty on to the next generation.

Truth Is The New Hate Speech. How Conservative Can You Be To Ignore Jihad & Sharia Law Escalating All Over The World?

These previous CPAC speakers, Robert Spencer & Pamela Geller were banned from CPAC (the Conservative Political Action Conference) this year, but how conservative can this group be if they are not even presenting the number one threat to freedom and mankind, the threat of totalitarianism?

“Under the blasphemy laws of sharia you cannot criticize or offend Islam. You are a racist, Islamophobic, anti-Muslim bigot if you touch this subject.”

Comments Off on Truth Is The New Hate Speech. How Conservative Can You Be To Ignore Jihad & Sharia Law Escalating All Over The World? |

Some Will Stand Up. You Go Pamela Geller! Keep Fighting For American Free Speech

Pamela Geller of AtlasShrugs has been fighting tirelessly since the first 9/11 terrorist attacks in 2001 trying to educate people on what we are up against in the war on terror -no small task in case you’ve been under a rock the past two and a half weeks. It’s a little long, but you won’t want to cut this video short!

The ad to the left is what her group, Stop Islamization of America have posted in the subways of NY City in response to anti-Israel ads that have been running all across the country for months.

Her detractors call it ‘hate speech’. Reverend Jim Wallis of Sojourners begs her to “stop talking.” Gee another American standing up for our First Amendment rights.

WRONG! He’s another apologist for violence in the name of Islam. According to the bio on his website “he’s a bestselling author, public theologian, speaker, and international commentator on ethics and public life”.

After watching the exchange on ABC above, I’d say he’s another clown from the social justice crowd making a handsome buck trying to sound holy. And he’s in favor of blasphemy laws!

Comments Off on Some Will Stand Up. You Go Pamela Geller! Keep Fighting For American Free Speech |

9/11 Attack ↔ The 13-story Mosque 2 blocks away which they hope to christen on the 10-year anniversary!

This is the advert paid for by a group in NYC trying to get the proposed mosque moved to somewhere not quite so close to where terrorists killed over 3,000 Americans on 9/11. But the group had to sue the city of New York who was refusing to depict this horrible part of our history as it happened. The Metropolitan Transit Authority objected to showing the juxtaposition of the World Trade Center towers to the proposed mosque. The MTA repeatedly made the group headed by Pamela Geller of Stop Islamization of America change the ad to be more PC; “Remove the plane, you cannot show the smoke, you cannot have the arrows connecting the 2 buildings”, etc., until finally SIOA filed suit. And they prevailed. The ads will run as originally submitted over a month ago and will begin appearing on MTA buses in New York City next week.

Imam Feisal Abdul Rauf, the guy promoting this mosque refuses to denounce Hamas (who as recently as late July sent rockets into Israel hitting a hydrotherapy center for disabled kids), and blames America for 9/11.  To add insult to injury our own State Dept. instead of investigating Abdul’s terrorist ties and where the $100 Million for the construction of the mosque is coming from, has decided to send him to the Middle East as an envoy to explain Western Culture!

“We do have a program whereby we send people from Muslim communities here in this country around the world to help people overseas understand our society and the role of religion within our society.”

What are we nuts? This is just more appeasement. Has everyone in our government gone stark raving mad? I think so.

Don’t forget to register to vote and then do it. VOTE ‘EM OUT.